Guess What Appeared on my Front Porch? 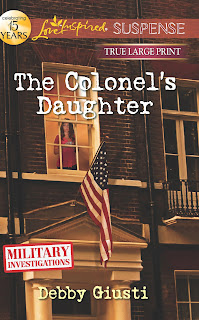 Busy with the final rewrites for my next Love Inspired Suspense, I wasn't thinking of my August release until three boxes showed up on my front porch last week.  I quickly hauled the cartons into my kitchen and carefully cut through the tape so I could open the lids and peer inside.

Of course, you've probably guessed what was in the boxes!  Copies of THE COLONEL'S DAUGHTER, my tenth book and the third story in my Military Investigations Series.  The two larger boxes each contained 48 paperbacks, while the smaller box held three books in the new large-print, trade paperback size.

I had sent the a number of pictures of military quarters to give them an idea of what I would like to see on the cover.  , the fictional Army post I created for the series, is located in , but the set of quarters I envisioned as I wrote the story is identical to a house at , where I had lived in my youth.

Not only did the provide an accurate rendering of the quarters, they also captured a feeling of suspense and intrigue, and added the heroine at the window as a bonus.

Love Inspired is celebrating their 15th anniversary in publishing. Congrats to the editors and staff, and a special thank you to my editor, Emily Rodmell, and the .

What do you like to see on covers?  Did you ever buy a book just because you liked the art work? Do you prefer still life covers or ones that depict the hero and heroine?

THE COLONEL’S DAUGHTER
By Debby Giusti
UNDER SIEGE
A ruthless killer is targeting the families of soldiers in a U.S. Army colonel’s brigade. Special agent Jamison Steele, of the Criminal Investigation Division, vows to stop him—because this time, Jamison’s heart is involved. The colonel’s daughter, the woman who loved and left Jamison without a word, came face-to-face with the murderer. Protecting Michele Logan means constant surveillance. And solving the mystery of the serial killer’s motive requires asking Michele the questions she least wants to answer. Questions that may lead them both into a deadly trap.

THE OFFICER'S SECRET, book 1, and THE CAPTAIN'S MISSION, book 2, are still available in paperback or e-book.  Order them here.

Posted by Debby Giusti at 3:30 PM No comments: